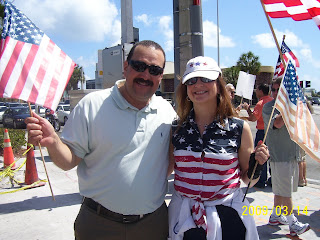 In case anyone is wondering, the Tea Party movement is a national phenomenon that began with a private citizen in Seattle (!), who organized 2,000 people to rally against the porkulus bill. Having been to Seattle several times during my tenure with Washington Mutual (not an easy flight to and from South Florida for someone with an aversion to airplanes), I can tell you I am absolutely shocked they had such a great turnout (someday I'll write a post about my experiences in the Community Relations/Marketing Department, as they relate to the current economic situation. One of my co-workers was in charge of CRA for Florida). Then came Rick Santelli's righteous outburst on the trading floor, and a movement was born.

Yesterday, another small but determined crowd stood out at the corner of US 1 and Oakland Park Blvd. again to call attention to this disgusting administration and their assault on freedom. And once again, I was saddened by the willful ignorance displayed by many of the passers-by, who shouted things like "Redneck!" and "Racist!" These insults were pretty ironic considering the presence of people like Reverend O'Neal Dozier and Tito Munoz.
However, as with past events, the reaction was more positive than negative, and several people who just happened to be shopping at Target joined us for a brief time. All inquired as to whether this was an event put together the Republican Party or some other organization; when we told them we were private citizens (albeit spurred on by the larger Tea Party movement) who just wanted to make our voices heard and attempt to educate others, they were very impressed. I collected many email addresses from curious citizens asking to be apprised of future gatherings. Thanks to Ed Napolitano of the Southeast Broward Republican club for responding so quickly to my intial email a few weeks back. Ed got us started at this location on February 28.
And it just so happens, there will be another protest on the same corner of US 1 and Oakland Park Blvd. this coming Saturday, March 21. For more information, contact teapartyftl@gmail.com. I won't be there this time, as I am heading north with some other patriots to take part in a big protest in Orlando.
Finally, I just want to thank everyone for making my birthday memorable yesterday, particularly Tito Munoz, who was in town for the Latin American Republican event, but took the time, along with Javier Manjarres of the Conservative Republican Alliance, to join us on the corner. Aside from being one of the nicest people I've ever met, Tito is a passionate, dedicated citizen whose commitment to reclaiming America is both admirable and crucial. It is reassuring to have his support and leadership, along with so many others in this difficult battle.
By the way, if you live in Florida, please visit Javier's site and consider joining. Part of reclaiming our country involves weeding the RINOs out of the Republican Party, which can't seem to learn its lesson, two deplorable election cycles notwithstanding.
UPDATE: From Powerline, looks like the Tea Party Movement is growing. Hope we can achieve similar numbers in participating Florida cities on April 15! Will post details as soon as I have them.
Posted by Daria at 7:50 AM