More Selective Outrage from the Left 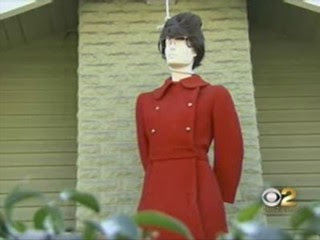 Which is most offensive?

Funny, the LA media didn't have this reaction when President Bush was depicted as Hitler ad nauseam during his eight years in office, or when Governor Sarah Palin actually was hung in effigy during the 2008 campaign. But ridicule their messiah as The Joker and their oh-so-sensitive feelings compel them to condemn the creator as "mean-spirited" and "dangerous," as Los Angeles Urban Policy Roundtable President Earl Ofari Hutchinson does in this report from KTLA:

Los Angeles Urban Policy Roundtable President Earl Ofari Hutchinson is calling the depiction, politically mean spirited and dangerous. Hutchinson is challenging the group or individual that put up the poster to have the courage and decency to publicly identify themselves. "Depicting the president as demonic and a socialist goes beyond political spoofery," says Hutchinson, "it is mean-spirited and dangerous." "We have issued a public challenge to the person or group that put up the poster to come forth and publicly tell why they have used this offensive depiction to ridicule President Obama."

Apparently, dissent and freedom of speech are no longer patriotic when there's a far-left radical -- I mean -- Democrat, in the White House. The irony of course is that lefties like Hutchinson, with their blind adoration for Barack Obama and knee-jerk intolerance for those who dare mock him, are the ones who are truly reflective of Hitler's brainwashed civilian corps. And in light of the fact that right-leaning political figures have been subjected to far worse, his criticisms are more than a tad hypocritical.

Where was his horror when the film Assassination of a President made its debut, while said president was still serving his term and presiding over two difficult wars? Why no urgency to out Sarah Palin's blatantly misogynist detractors? At least in the case of Barack Obama, the socialist accusation is grounded in his own proposed legislation, policies and rhetoric. We can argue whether it defiles the office of the presidency to produce such images, but if we're going to have that debate, by all means let's consider all offenders and political targets -- not simply those who disagree with your embodiment of Hope and Change.

Memo to Obama and his lemmings: freedom of speech and expression work both ways. If you can't stand the heat, perhaps it's best if you stick to community organizing.