Truthers and other Strangers 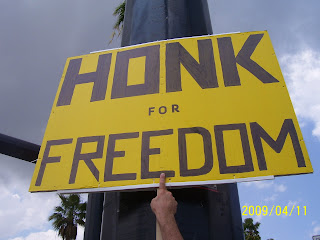 Conservatives and their next-of-kin, libertarians -- much like some actual families -- have tended to co-exist in a sort of marriage of convenience. An oftentimes uneasy alliance, whereby shared outlook on limited government, taxes and economic issues form the common denominator, while hot-button topics such as abortion and marijuana are best left unexplored, if the family wants to enjoy a peaceful gathering around the dinner table.

Since January 20, this union has blossomed and strengthened, as stimulus-outraged Americans from cities and small towns all across this great country have organized to protest the horrors of government overreach. And for the most part, we've put our differences aside, understanding that the greatest threat to our national security disturbingly resides in the Oval Office and in the halls of Congress -- thus demanding concentrated focus on the problems that unite rather than divide. All well and good when it comes to preserving the Constitution of the United States of America, and the vision put forth by our Founding Fathers.

However, as a staunch conservative with a streak of libertarian (mainly in the arena of economics), I've long grown weary of conspiracy theorists; 9/11 and FEMA "Truthers"; and Ron Paulnuts. These tea party crashers, emboldened by the laundry-list of valid greivances against President Teleprompter, have been bombarding us lately with their asinine rantings, preaching the gospel of the ultimate nutjob, talk radio host Alex Jones.

For those of you who aren't familiar with Alex, Michelle Malkin's post from May of 2007 will shed some light on why this man -- along with his congressional ally Ron Paul -- is not to be trusted as a reliable source on anything. Jones also assaulted and harassed Malkin at the DNC last year, an incident caught on video for the entire world to see.

My problems with the Truther gang started on Facebook, when I posted a beautiful video tribute to President George W. Bush, set to Martina McBride's inspirational song, Anyway (I'd originally posted it on Palin Drone back in January). Yes, as a "three-legged stool," Reagan conservative, I have my grievances against President Bush ("compassionate conservatism," amnesty, signing McCain-Feingold into law, even though it was unconstitutional, etc).

But I am the kind of person who gives credit where it's due. And the fact of the matter is, the man kept us safe for 7 1/2 years; genuinely loved the United States Military; and bravely acted in this country's best interests, in spite of a relentless onslaught of the most vituperative attacks aimed at any president. I'll say one more thing for George H.W. and Barbara's son: he's sure made of tough stuff -- physically, mentally and emotionally!

Well, the video didn't sit too well with certain members of my "friends" list, who promptly went into full assault not only on W, but on me as the poster of the video (suffice it to say, these folks are no longer my "friends"). Worse, their poison seems to be having an effect on others whom I've known to be conservative. One such person, mimicking a flaming liberal, actually reflected upon President Bush's reaction when then Chief of Staff Andy Card whispered in his ear that the WTC was under attack.

"Keep in mind, President Bush had been reading to very young school children at the time, and I am sure he didn't want to scare them," I told her. "Can you even imagine being in his position? What exactly did you expect him to do?"

She didn't type back a real answer, just a vague, "Yeah, but I still wonder...."

This incident followed my attendance a few weeks' prior at the Orlando Tea Party, where close to 6,000 gathered to fight for freedom and uphold American values. As we walked the few blocks from the parking lot to Lake Eola Amphitheater, we passed by a group of Truthers handing out DVDs of The Obama Deception, a film produced by Alex Jones. I rejected the offer as soon as I realized its source, but one of my friends joining me for the event stated that she'd watched it. Although conservative like me, she believed there was probably some element of truth embedded in nearly two hours of lunacy.

Understanding the genesis of the film, but wanting to a) keep an open mind and b) "know my enemy," I finally relented. Prognosis: Alex Jones is delusional.

Look, there is nothing I like about Obama or his Marxist plans for this country. I get that he's a total fraud, a Soros puppet, an ACORN community-organizing thug, and a master of deception. These are all things any voter could've discovered, had he or she spent any time reading reliable blogs, listening to talk radio or watching FOX News. Likewise, they are all realities about Obama revealed in the DVD.

However, don't let the name fool you: this movie is as much about trashing President Bush as it is about exposing Obama's agenda. Without getting into too much more detail, it upholds the theory of 9/11 as an inside job, while curiously omitting one very glaring reality -- Global Jihad. Nowhere in this film do we see militant Muslims shouting "Death to Israel and America!" or images of Osama bin Laden regaling us with his special brand of venom from the cave. I don't know if the name Dr. Zudhi Jasser rings a bell with any of these folks, but it's obvious they didn't consult with him on this ridiculous effort; I'm also fairly certain they missed Jasser's film The Third Jihad.

Which brings me to this past Saturday. Standing at the corner of US 1 and Oakland Park Blvd with other patriots like my friends Jack, Derrick and Dan, a seemingly amiable (if pudgy) fellow approached us to inquire about our activity. At first he was as receptive to our cause as we were to him -- that is, until he began spouting Alex Jones talking points.

Now even though I'm a passionate girl when it comes to my country, I've learned it's best not to engage when one finds oneself in situations such as these. However, having lost a 22 year-old cousin in the Towers and knowing the unspeakable grief that has plagued his parents ever since, my patience for this crap had just about worn thin. I screamed at the red-headed dirtbag, demanding to know if the phrase "Global Jihad" meant anything at all to him; further, I excoriated him about his insensitivity to surviving family members like my cousins, and people like Debra Burlingame, whose brother Chick had piloted the plane that crashed into the Pentagon.

But as I quickly discovered, fighting insanity with sanity is a losing propostion. This guy even had the audacity to tell me that I had no right to speak out, since I'd never been in the military and thus, knew nothing of warfare. Before walking away in disgust, I of course had to set him straight about the Constitution he claimed to love so dearly, which recognized my right to say anything I damn well please! (Well ok, except "Fire!" in a crowded, perfectly safe theater, but I'm cool with that ;).

On the bright side, an impressed Dan remarked that I was "sparky" and "feisty," so I got that going for me!

In all seriousness folks, please don't fall for this garbage. In addition to ACORN nuts, we also have to contend with conspiracy nuts who are as impervious to facts and debunking as Rosie O'Donnell is to proper nutrition and exercise. And now that the Tea Party movement is gaining remarkable traction as a genuine grass-roots phenomenon, Truthers are coming out of the woodwork. Yes, we agree on fiscal issues and the concept of limited government, but from what I've discovered, that's where it ends. I also believe there's very real potential for them to discredit the entire Tea Party effort, as Huffington Post and other leftie organizations actively seek any method of sabotage.

So while you're railing against indebting our children to China, remember to keep one eye out for ACORNs and the other for assorted nuts of the conspiracy theory variety.
Posted by Daria at 9:06 PM