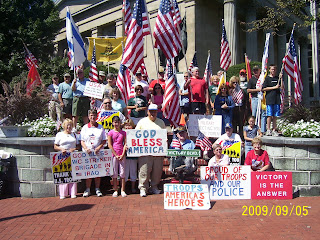 During my month-long visit to Pennsylvania, I've joined my parents at several Town Halls and Tea Parties, including Dom Giordano's healthcare panel at The Philadelphia Inquirer, where I witnessed Joe Sestak give John Edwards a run for his money for the title of sleaziest politician in America. I documented the entire experience on Facebook, along with photos.

And this past Saturday, I had the pleasure of meeting more Keystone State patriots in front of the courthouse in West Chester, site of their weekly gathering. Among the crowd of 30+, I spoke with many dedicated activists from all walks of life, ranging from retired CEOs to small business owners to veterans. People like event organizer Mark Driver, a grass-roots activist since 1990. Among other things, Mark is a member of American Sheepdogs, Pennsylvania Conservative Council, six different Tea Party groups, and an organization named ACTION (American Christian Traditions In Our Nation).

When I asked about his biggest concern with Obamacare, Driver stated emphatically, "The very last page, where it is written, 'if you do not accept government healthcare plans, states' rights will be limited.' That is the most disturbing line in the entire 1,000-page bill for me, as it is another power-grab by an ever-expanding centralized government."

Fellow protester/organizer Craig Cody agreed. Though politically aware for the last 12 years, he'd never gotten active -- that is until he realized the necessity of getting involved. "Our Founding Fathers were smart," Cody told me, "They were great students of history, and that's what we have to get back to. I am thankful for the millions of regular citizens who are fighting for our freedom."

On such citizen is Cody's remarkable son, Quentin, just eleven years-old, and one of the Tea Party movement's most passionate orators. Quentin first spoke at the West Chester Tea Party on April 4, 2009, and is scheduled to address an Americans for Prosperity event this coming week. Along with his sister Shannon, Quentin offers hope that all is definitely not lost when it comes to future generations.

I also met retired CEO and West Chester resident, Dennis Stewart, a man who "knows how to build and lead championship teams", and spent 37 years crusading for various corporate causes. A staunch pro-lifer, Dennis is the author of Eating Our Young On A Full Stomach: The Truth About Embryonic Stem Cell Research.

Finally, there was US Navy vet and event organizer Rich Davis, who gathered us together on the courthouse steps before we adjourned, to recite the Pledge of Allegiance, sing God Bless America and pray the Our Father. Rich also announced two other events taking place that day in nearby Exton and King of Prussia. Undaunted by the small group of counter-protesters across the street, bearing signs with drawings of aliens and slogans of "They're back" on them, he told me that they'd long ago come to an arrangement to stand on opposite corners to avoid any potential conflicts.

Once again, I was incredibly impressed by the vast knowledge, intelligence and passion expressed by my fellow patriotic Americans who -- despite every attempt by the mainstream media and the White House to marginalize and intimidate them -- refuse to back down. Can't wait to ride the bus to DC with the Chester County group!

Here's the story of Rich Davis and the Chester County Victory Movement: