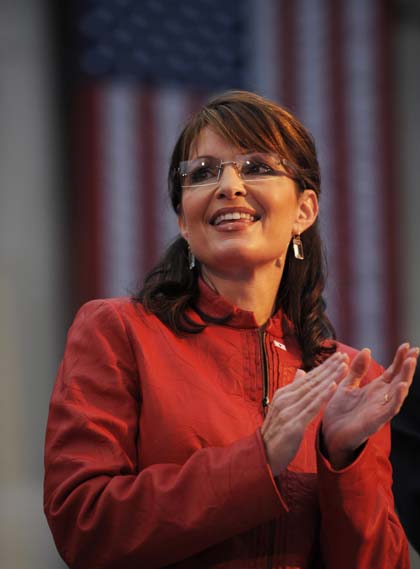 If you are so inclined, head on over to Parcbench for my latest post on Governor Palin's excellent Tea Party Convention speech, which in typical fashion, has attracted all of the 9/11 truther trolls. Did you know that Sarah Palin is "bloodthirsty" simply for demanding that enemy combatants be treated as such? Or that she's single-handedly "driven a stake" through "Ron Paul's" Tea Party Movement? I know it to be true because the Paulnuts tell me so.
As I've been repeatedly pointing out, the far-right poses just as big of a threat to the successful take-back of Congress in 2010 as liberals -- actually, I submit they are even more dangerous. While promoting the concepts of limited government, individual liberty and low taxes, they inexplicably fail to acknowledge that none of that amounts to a hill of beans if radical Islam gets it way with the west. I don't know why these people refuse to face the reality of a rabid ideology wrapped up in a cloak of religion that demands total allegiance to Allah, subjugates women and infidels, and salivates over the imposition of Sharia Law worldwide.
If there's any conspiracy going on, surely it's Global Jihad. How many successful attacks, nearly successful attacks, beheadings, honor killings and screeds of "Death to America"! is it gonna take?
Ironically, Debra Media, candidate for governor in Texas, has finally been "outed" by Glenn Beck as a 9/11 Truther today. Having been familiar with Medina, and being Facebook friends with those well-acquainted with her, it comes as no surprise. But now at least the rest of the country is on to her loony trutherism, thanks to her own bumbling of a perfectly reasonable question.
Finally, I am hosting Diane Student on The Liberty Belle Hour tonight at 7 p.m. And as with last week, I am prepared for the troll calls, which will most certainly arise with the publication of my latest Parcbench article.
Bring it on!
And Happy Birthday, Governor Palin! God bless you!
Posted by Daria at 2:26 PM